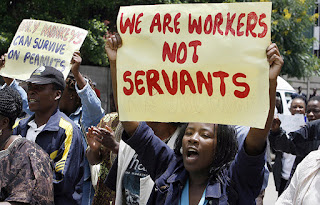 Adnan Adams Mohammed Sections of the public sector workers on government payroll have threaten massive industrial actions against the government to express their disappointment of the seven (7) percent salary increment. The government, through the Employment and Labour Relations Minister, Ignatius Baffour-Awuah, last week, made the announcement to increase the base pay of public sector workers for the year 2022. This is three (3) percent more than the base pay increase of four (4) percent for 2021. This does not sit well with public sector workers including: Ghana National Association of Teachers (GNAT), the Civil and Local Government Staff Association of Ghana (CLOGSAG) and other unions as they describe the pay structure, Single Spine Salary Structure (SSSS), as an apartheid system. They noted that, the public sector worker will only be satisfied with what is contained in the Ntiamoah Committee report, which states that what should be given to Article 71 officeholders should not exceed that of public sector workers. “How good is seven per cent for the public sector worker when strangers (politicians) have entered into our coffers and have taken 80% and they are giving us 7%?”, convener for the Aggrieved Public Sector Workers, Mr Norbert Gborgbortsi, quizzed with disappointment. “We are mobilising from the district level. You’ll see us soon on the streets. We’re planning towards no work at all but we don’t have a date yet.” “They (politicians) come for four years and they leave”. On the other hand, he said: “We work throughout our lifetime, 40, 50, 60 years until we go on retirement; some even die in the course of their jobs and, so, it is unfortunate for them to award us 7% and award themselves 80%.” “This 7% we are talking about, some people may be taking home GHS35 at the end of the month and that GHS35 is being eroded by inflation already, not to talk of the taxes they want to introduce like the mobile money tax and the NHIA levy; and that percentage is subject to your tax before it is being released to you, so, before the money gets to you, it is not even up to that GHS35.” Executive Secretary of CLOGSAG, Isaac Bampoe Addo, reacting to the announcement said, the pay structure which is used to pay public sector workers had resulted in a great disparity between the salary of workers in different classes of the sector. According to him, the payment structure was also not transparent enough. “To us as CLOGSAG, the issue is transparency. This apartheid system of salary administration in the public services must give way to scientific thinking. There are differentials of salaries in the public services, and these are the things they must look at.” “Every year, we hear revenue shortfalls from the ‘Ministry of Expenditure’. Yet, Ghana Revenue Authority will tell us they have exceeded their target every year, so what are you talking about? We must take a look at the single spine salary structure,” he added. Bampoe Addo said it was the view of CLOGSAG that the payment structure showed be reviewed as soon as possible. The Executive Secretary made these remarks in response to government increasing the salary of the public sector workers by 7 percent. Mr Baffour-Awuah speaking at the 6th Quadrennial National Delegates Conference and the 90th-anniversary of the Ghana National Association of Teachers (GNAT) held in Kumasi made the salary increment announcement. He noted the four per cent increase was due to the impact of the COVID-19 pandemic on the economy. He said: “Yes, we endured a difficult time during the period of COVID-19, but, Mr President insisted that under no condition should any Ghanaian worker lose his job during the period of COVID-19. Through that, we were able to safeguard the work of every public sector worker in Ghana including teachers, for which members of GNAT are included. So, we want to express our appreciation to you.” He noted that in return, “Mr President, we had to also negotiate with the leadership of organised labour and in the process, we also agreed that we had to be modest in our request on the national kitty; that is how we ended at the four per cent.” “But Mr President, the beautiful thing is that we are moving on and we have agreed that coming into this current year, the four per cent will no longer exist and that we are going to give workers a seven per cent increase,” he added. The employment and labour relations minister expressed hope and belief that things will begin to work better for the economy “so that we can give our workforce a better remuneration that they can actually be proud of.” Touching on pensions, he applauded the Ghana National Association of Teachers (GNAT) for having what he described as one of the best pension schemes in the country. “I’ll say that on issues of pensions, currently as we speak, GNAT has one of the best occupational pension schemes operating in the country now and I’ll like to thank them for the pioneering role they’ve played together with their other colleague organised labour, in helping us to shape the pension front and, especially giving us one of the best pension schemes, the three-tier pension scheme, which currently is serving the interest of our pensioners,” Mr Baffour-Awuah said.